Could Cutsey Possibly Get Any Cutsier? 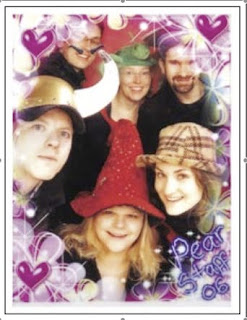 If you head down to the covered shopping area in Shinae, you will most likely find a large crowd  gathering in Princess Club. What is Princess Club you may well ask? Well, it’s basically a place where  Korean’s, young and old, couples, friends and families alike – all gather to take pictures of themselves in brightly coloured booths. After taking these pictures, they then proceed to decorate them with hearts, cartoon characters, writing, stars and the like, and then attach them to key chains, use them as phone bling or just stick the stickers any place they can.
Why do they do this? You may have noticed that Koreans love to take photos of themselves, whether it be with their mobile phones or digital cameras. When I questioned my Korean co-workers about this fascination, they looked a little confused. They explained to me that the reason Koreans take pictures of themselves is simply because they can. When I questioned this further they told me that technology in Korea has developed so quickly over the last few years that they are still in the “honeymoon” stage with it and therefore haven’t become bored of playing with it.
Although us Westerners may not be quite as fascinated with taking photos of ourselves, you will still find the Princess Club an amusing place. I have, it has to be said, been converted to the wonder that is Princess Club and try and find an excuse to go there any time I can, dragging half of Ulsan with me – hey if in Korea do as the Korean’s, right?
The price for the photos depends on the size and the quantity you want, but the usual is around 3,000-5,000 won. This will either get you a large photo or around 20 small photos to enjoy and use to your hearts content. You may find that you have to wait for a few minutes till a booth becomes available but once inside it is fun and games to be had by all. You can choose the angle from which the photo is taken, delete the photo and start again if you find you have double chin syndrome or your eyes closed, and you can modify it after you’ve taken it to make the photo darker or lighter. A note to remember though is that though is that the booths tend to have a time limit, which seems to vary depending on how busy it is in the Princess Club. It does have a countdown clock, so just make sure you don’t run out of time.
Another amusing addition to the Princess Club experience are the costumes, hats and wigs that you can borrow for your photo taking experience. Most are rather shabby and used but you will still find some comedy things to don to make your pictures that bit more ‘special’. Once you have finished taking the pictures in the booth – usually 4 in total – you step outside to decorate them with stars, writing and various other pictures and colours. Again this has a time limit so just keep an eye out and don’t spend too long on one picture. 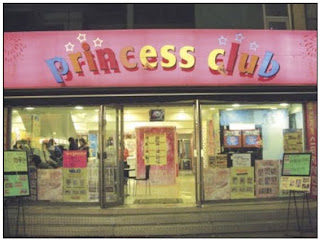 Once you have your picture in hand go to the desk on the left hand side of the shop. There, a lady will cover the picture with a glittery cover for free. Next to this you can buy various photo holders on key chains or phone bling – all cost around 1,000 won each. At the front of the shop you will find tables with several pairs of scissors. If you go with a group of friends then you can seperate the photos here, divide them up amongst yourselves and stick away to your hearts content.
A note to the boys – you are not allowed in Princess Club unless you are with a girl.  Although I doubt many of you would venture in alone, or without being dragged forcibly by a girl, it is something to be aware of.
Princess Club in situated in the covered shopping area in Shinae. If you are walking away from Holly’s, with Megabox on your right, Princess Club is about 500 metres down on the left hand side, past Fashion News, across the road from The Face Shop. If you get to the neon nightclub district, you’ve gone too far. There is another photo booth store called kitty-corner next to the D&I building.
CuteCutseyCutsierFriendsKoreaPhoto BoothPhotographyPhotosPicturesPrincess ClubSouth KoreaUlsanUlsan OnlineUlsan Pear
0 Comments
By Katherine